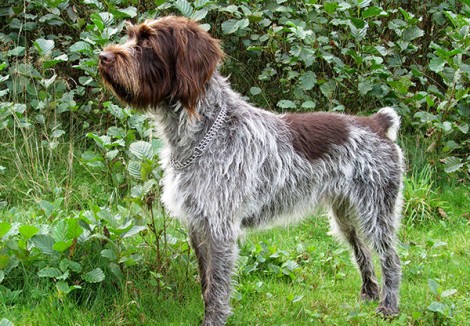 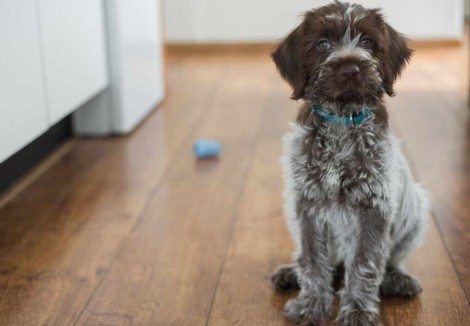 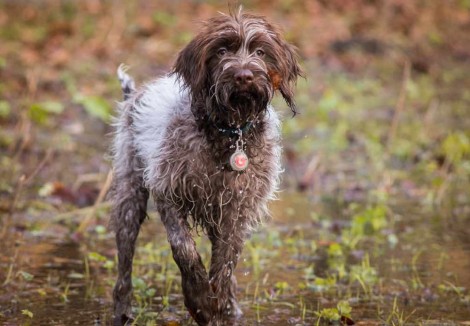 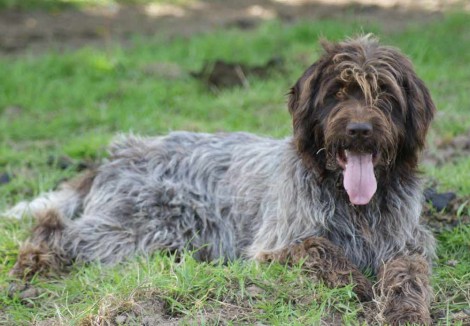 The Korthals Griffon (also called the Wirehaired Pointing Griffon) belongs to the gundog group and is considered one of German ancestry, although others debate that its origin is Holland due to the nationality of the founder. One outstanding characteristic of the breed is its dense, wiry double coat with a thick undercoat that provides insulation to the dog. The breed is named after its founder, Dutchman Eduard Korthals who developed the breed in Germany around 1873 as a versatile gundog. The Korthals Griffon is a vigorous, robust working dog, a versatile hunter, pointer and tracker of large wounded game. Among the physical attributes noteworthy of the breed include a moustache and beard which gives the dog a characteristic expression of determination and assurance. It is often described as a gentle, very loyal dog, superior, neither fearful nor aggressive. The coat can either be steel grey with liver brown patches, solid liver brown, liver roan, liver brown with white hairs or white and brown. In any colour, the undercoat is all brown. The standard size for dogs is 55-60cm while bitches are between 50-55cm.

Thinking of buying or adopting a Korthals Griffon?

The breed was founded by Dutch national Eduard Karel Korthals around the 1870s in his Ipenwould kennel in Biebesheim am Rhen in Germany. Leaving Holland, Korthals settled in Hesse, Germany where he took over the management of the kennel owned by the Prince of Solnes Braunfels. It is in this kennel that Korthals devoted 20 years of his life to the development and perfection of the breed. His dream was to develop an all-around gun dog that can hunt, point, set, and retrieve game both on land and in water; a dog with tremendous flexibility, energy, and highly devoted to its master. Working originally with seven Griffons of varying type, he was able to keep just 62 dogs out of 600 bred in his 20-year career as the developer of the breed. Throughout the years, experts hinted that Korthals also introduced the German Pointer blood to the mix. He was awarded a medal by the Kaiser of Germany in 1890 in recognition of his breeding success. When he died at the age of 44, breed followers and friends from France, Holland, and Germany continued his breeding programme as they do until now via various registered breed clubs all over Europe and the UK.

The Korthals Griffon is an intelligent breed, one with a softer temperament compared to other HPR breeds with a keen willingness to please its master. Like most Griffon breeds, the Kortals Griffon does not take well living in a kennel but would rather prefer sleeping alongside his master in the comforts of the house. It is very people-oriented and prefers to socialise and bond with its human family whenever the situation permits.

Training should be firm, consistent, and gentle. The Korthals Griffon does not tolerate harsh training methods. This is a natural working dog that can be trained to work in any terrain and can do extremely well as a pointer in the field and as a retriever in the water. It is a very good watchdog but can be trained to become a guard dog as well, although not effective as the other breeds. A puppy Korthal Griffon can prove to be a handful which requires an experienced handler/owner, definitely not a dog for first-time dog owners.

This breed requires minimal grooming and trimming by using stripping combs particularly around the eye area to keep the line of sight clear. In France, it is customary for breed owners to “clip and coiffure” the head area up to the neck, although this is not followed elsewhere. In all other aspects, regular weekly brushings will keep the coat in excellent condition.

The Korthals Griffon is a generally healthy breed with an average lifespan of 14 years, considered long-lived for a dog of its size. Because the breed was developed as an all-around gundog, it has naturally good bone structures. There are no known serious health issues that affect the breed. However, recent findings have shown that a new breed has been infused into the Korthals Griffon in some bloodlines. This is evident by the yellow/tan colour anomaly found in some Griffons. It is this reason why breed clubs in different countries are split on whether to recognize just the genuine Korthals Griffon (as in the UK) or all breeding including the hybrids. Health clearances should be guaranteed by the breeders.

As a true working gundog, the Korthals Griffon requires regular exercise in order to stay strong and healthy. As an active breed, it requires rigorous physical and mental activities in order to stay fit. An ideal exercise is a good hour to an hour and a half of varying activities so that the Korthals Griffon will stay interested and will not get bored. When not working in the field, this breed will enjoy swimming activities, as well as running off leash in a well-secured area.

Children and the Korthals Griffon get along well together as the dog is a people-oriented breed that loves pleasing its human companions. It is highly respectful of older children but can sometimes be impatient with toddlers who may “rough-handle” the dog. It is generally friendly towards other dogs, pets, and other domestic animals. 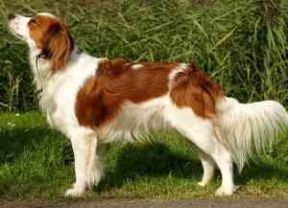 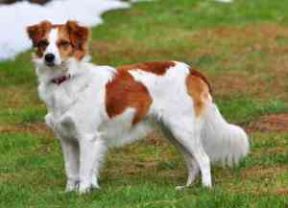 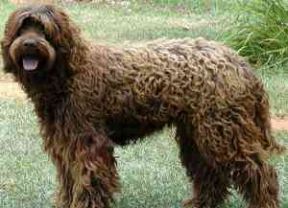