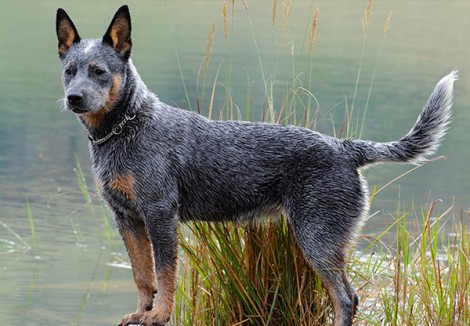 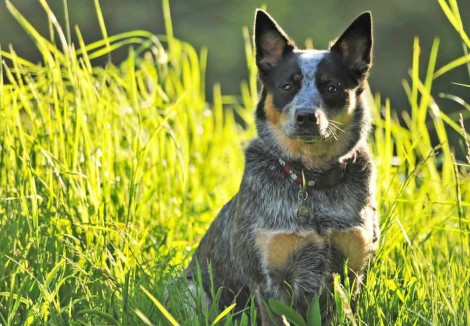 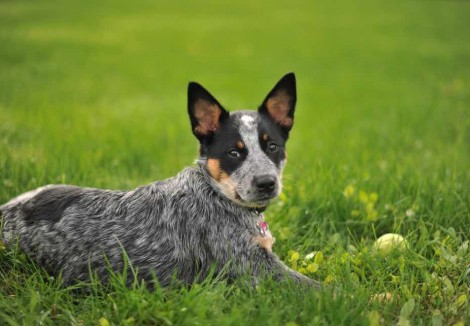 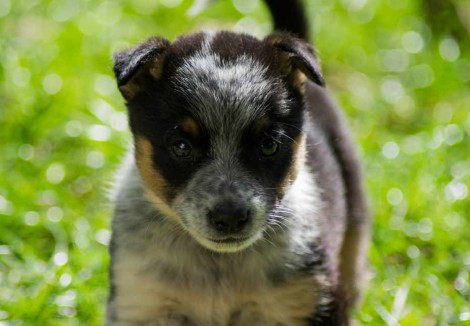 The Australian Cattle Dog is a medium-sized dog with a well-muscled, compact body covered by thick coat of coarse, oily hair with a minor ruff, and fine winter undercoat. Its coat is composed of alternating coloured and white hairs, with a solid colour facial mask. The Cattle Dog's alternate colours are blue (Blue Heeler) and red (Red Heeler), having a body flecked with red and white as opposed to blue and white. Regularly-placed denser areas of dark colour appear as spots, descended from the Dalmatian breed. Blue Heelers have darker blue spots while Red Heelers have darker red patches. Stripes of white hair in the centre of the forehead known as a Bentley Mark is common, typically from ½ inch to 3 inches (2 - 7 cm). On average, dogs stand between 18 to 20 inches (45 - 51 cm) and weighs 32 to 35 pounds (15 - 16 kg.) Bitches stand between 17 - 19 inches (43 - 48 cm) at withers and typically weigh 30 to 35 pounds (14 - 16 kg). They have large pricked ears and a big broad head.

Thinking of buying or adopting a Australian Cattle Dog?

The Australian Cattle Dog was created in the 19th century by pioneer settlers for herding flocks through cross-breeding several kinds of dogs, because of their many useful traits, such as Smooth Coated Collies from Scotland, Dalmatian, Australian Kelpie, Bull Terrier and a couple of infusions of the Dingo, Australia's wild dog. Each new breed brought some more desirable traits to this excellent herding dog.

Thomas Smith began breeding a herding dog commonly known as heelers as they had to bite the heels of the animal they where herding without damaging the animal, this included cattle and other livestock. To create a hardy dog that could survive in the outback, typical herding dogs where crossed with Dingo's resulting in a breed called 'Timmins Biters' which were quiet when herding but bit too hard at the heels of the animals, so Border Collies and Smooth coated Collies were cross-bred with Australia's wild dogs (dingoes). In 1840, Thomas Hall produced the 'Hall's Heeler' by cross-breeding a couple of Blue Smooth Highland Collies with dingoes. In 1870, Fred Davis added a breed of Bull Terrier to the Hall's Heeler to make them more aggressive. The result is a slightly heavier and more muscular breed than the Border Collie. In 1893, Robert Kaleski came up with a breed standard which was approved in Australia in 1903.

The Australian Cattle Dog is one of the most intelligent breed of dogs, but are easily bored which can lead to destructive behaviour problems especially if they don't get the proper exercise. Since they were originally bred to herd cattle, these dogs are silent workers and do not bark excessively. They are habitual diggers and foragers, traits descended from the Dingo.

The Australian Cattle Dog is very easy to train. It is an absolutely loyal breed and very obedient to its master.

The breed's short-haired coating needs very minimal care making it quite easy to groom. A firm bristle brush may be sufficient to comb the hair. Shedding happens once or twice annually.

The Australian Cattle Dog is a fairly long-lived breed, reaching an average age of 12 to 15 years. However, there are a few health concerns for the Cattle Dog, most notably regarding eyesight, including:

Other known health problems for this breed are:

Occasional deafness can also occur, so make sure to ask breeders about deafness testing.

The Australian Cattle Dog needs a lot of outdoor exercise and is not suitable for apartment life because it tends to be destructive and will chew on anything when bored. It's ability to climb and dig holes (instincts maintained from the Dingo) means that it must be kept with a high fence with buried base.

This breed tends to be bossy, protective and alert so it makes an excellent guard dog, although not very good with other dogs as its dominance level is high. It is also not good with children except for family members whom it has grown up with because they tend to nip at people's heels in an attempt to herd them. 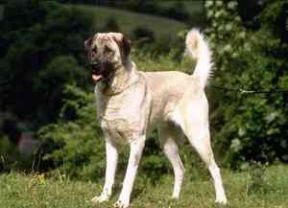 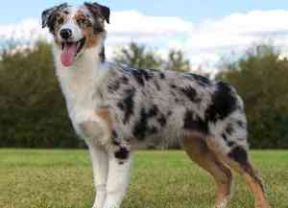 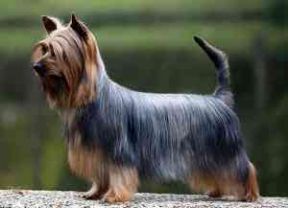