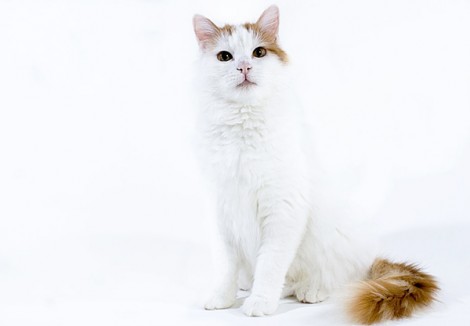 The Turkish Van is a rare and large-sized, semi longhaired cat, with a long and sturdy body and distinctive markings on its head and tail. Also known as the Swimming Cat, the breed is most well known for its unusual and remarkable love for water. A broad and muscular chest perfectly complements the powerful look of these cats. The head is broad and wedge-shaped, while the nose is medium to long. The ears are large and set high on the head. The Turkish Vans have large, expressive and oval-shaped eyes, blue, gold or even odd-eyed in colour. The legs of this breed are medium in length, with round, neat and tufted paws. Another striking feature of these cats is its long tail with a full brush, forming a beautiful plume when fanned out. It is important to remember that the Turkish Van cats do not mature completely until they are three or four years of age.

Thinking of buying or adopting a Turkish Van?

The Turkish Van breed of cats is an ancient and natural breed, believed to have originated in the eastern part of Turkey, also known as Eastern Anatolia. These cats were first spotted by two Englishwomen, Sonia Halliday and Laura Lushington in the 1950s around Lake Van in Turkey. It is here that it developed the habit of swimming out into the harbour to meet the incoming fishing boats, hoping for a free meal. The term 'Van' is very commonly used in the region and is used for the names of various towns, villages and even a lake, the Lake Van. Hence, the residents of the area named this uniquely pattered cat as the 'Vancat'. It is also believed that the breed was first brought into Europe from the Middle East by the returning crusaders. Over the centuries, owners have given this breed a variety of names including the White Ringtail and the Russian Longhair. The breed was first brought into England in 1955 and was extensively developed further by an English breeder, Lydia Russell. Later the name was changed to Turkish Van to avoid any sort of confusion with the Turkish Angora. The Turkish Van breed was first introduced into the United States only in 1982. Considered as a regional treasure, these cats are rare even in their native land. Today, they thrive happily in Iran, Iraq, southwest Soviet Union and eastern Turkey. The UK Governing Council of the Cat Fancy (GCCF) recognised the breed for Championship status in 2000.

The Turkish Vans are an extremely affectionate, playful and active breed of cats. They bond extremely well with their owners and love attention from them. Though they are not the typical lap cats the Turkish Vans will always want to be near their owners and even follow them all around the house. Being fun loving and loyal, these cats also make for excellent companions for children and older people in the house. Highly agile and energetic, these cats are full of life and are always ready to play. They love to play games like fetch, especially with their owners. With their strong and muscular body, they can actually leap high and across, while enjoying their favourite games. Having a strong fascination for water, these cats love playing with dripping faucets and even enjoy bath toys. The Turkish Vans are also very intelligent and can find their way around even in new places. These interesting creatures can easily figure out the way to open doors, cabinets and closets. Being highly curious, they will take keen interest in all the activities around the house and will love to explore the new things in the house.

Like the majority of vat breeds, they do tend to shed frequently during the change of seasons and during this time they would need regular grooming to prevent knots and tangles in their coat.

It is also important to clean their ears regularly to prevent the build-up of dirt which can lead to an ear infection. Their ears should be checked on a weekly basis.

The Turkish Vans are generally a very healthy breed of cats and do not suffer from any major genetic problems. However, it is important that these cats be taken for their annual health checkups at the veterinarian. This is primarily to ensure the proper cleaning of teeth and to check the kidney and liver function.

The Turkish Vans are a large-sized and affectionate breed of cats, ideal for households with many people and a huge play area. These cats require a moderate level of grooming to keep their coats in a good condition. Regular brushing is important to avoid formation of fur balls. In addition, it is important for the owners to clip the claws of these cats on a regular basis and to keep their ears clean. Overall, these cats are quite active and require up to 80 Kcals of food per kg of their body every day. 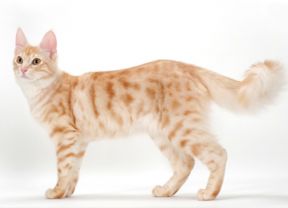