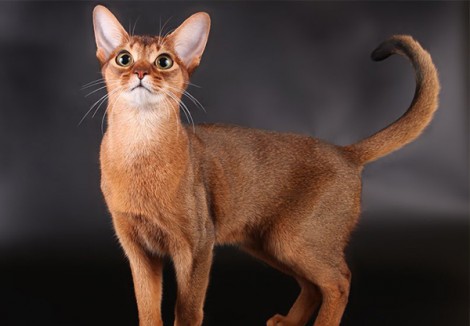 A distinctively ticked coat and a regal appearance stand out as the most prominent physical attributes of the Abyssinian cat. This colourful breed bears a stark resemblance to the Felis silvestris, the African wild cat considered as the ancestry of all domesticated pedigree cats. Each hair on an Abyssinian's body has four or five different colours, alternating from root to tip with a sparkling effect, giving it the famous ticked look. With a lithe and graceful structure, the Abyssinian is essentially a balanced cat. Medium in size, the Abyssinian boasts of a long, hard and muscular body, with slim and fine-boned legs. The head is modified, with a slightly rounded wedge shape, flowing into the stunningly arched neck. The ears are large, alert and slightly pointed, having a broad and cupped base, while the muzzle is neither sharply pointed nor square. The eyes of an Abyssinian are another attractive feature. Large and expressive, these are green or hazel in colour often accentuated with a fine dark line and encircled by a light coloured area. The paws are small, oval and compact, often showing tabby markings. Sometimes, these markings can also be found on the tail, which is long, thick and tapering at the base. Abyssinian cats have a soft and silky coat, fine in texture, but dense to touch.

Thinking of buying or adopting a Abyssinian?

Although it is one of the oldest known breeds of cats, yet the origin of the Abyssinian breed largely remains a matter of research and speculation. However, the most well-accepted theory is that the Abyssinians originated from the Zula, an Egyptian female kitten. The Zula was bred with the English tabby in England after Captain Barrett Leonard brought her from Abyssinia (Ethiopia) in 1868. According to another theory, the Abyssinian's origin can be traced to the coast of the Indian Ocean and parts of Southeast Asia. As per a yet another legend, the Abyssinian is believed to be the 'Child of the Gods', the favoured descendant of the cat goddess worshipped on the banks of the river Nile. One of the first mentions of the Abyssinian breed was made in a book in 1874, while the breed gained recognition in Britain in 1882. In addition, Harper's Weekly also reported the news of an Abyssinian cat bagging the third prize at the Crystal Palace Show in December 1871 (January 27, 1872 issue). The Abyssinian breed has gained immense popularity and is today the most popular short hair breed. The UK Governing Council of the Cat Fancy (GCCF) officially recognizes the Abyssinian cat.

Active and lively, these cats are highly people-oriented and are considered wonderful companions. Not only do they take interest in what you are doing, but will even want to help in their own way. Owing to their strong trait of loyalty, these cats often make good companions for children and active older people. Abyssinians are usually not the typical lap cats and are highly curious and playful. These 'busy' cats love to explore their surroundings from high places such as the top of a refrigerator, a bookshelf or even from their owner's shoulders. Abyssinians also express great love for the water. In spite of being playful, the Abyssinians are generally not a noisy breed and can convey their feelings and want in a number of ways. The male species of the breed generally get along well with other cats, though the female might prefer to be the only cat in the house. In addition, both the sexes of Abyssinians can form a strong attachment with dogs and generally get along well with other animals.

Overall, Abyssinians are generally a healthy cat breed. However, they are quite vulnerable to plaque, tartar build-up and gingivitis. If left untreated, gingivitis in Abyssinians can cause periodontitis, which is an inflammation around the tooth root. This condition, in turn can lead to a tissue, bone or tooth loss. Abyssinians' general state of health can suffer largely due to untreated dental diseases. Normally, this breed requires an annual veterinary checkup, a periodic teeth cleaning by the veterinarian and regular tooth brushing, using cat toothpaste. A special cat toothbrush or a child's soft toothbrush can solve the purpose. In some cases, renal amyloidosis, a hereditary disease has been found to cause kidney failure in the Abyssinian cats. Erythrocyte pyruvate kinase (PK) deficiency has also been traced in some members of the Abyssinians breed.

The lively temperament of Abyssinians makes them ideal pets for families looking for an active and loving cat. This affectionate and intelligent breed of cat strives for human company, which makes them unsuitable for homes where they have to be left alone for long hours. Owing to their playful temperament, the Abyssinians love large open spaces. Surroundings that are suitable for fun-filled interactive play with their owners are a necessity. Being good at climbing, these cats will appreciate gardens with a variety of trees and high places. Also, make sure you provide enough toys and scratch poles to complement their natural instinct of scratching. 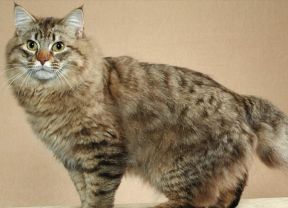 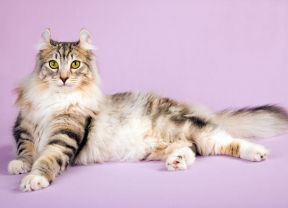